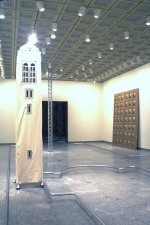 From Door To Tower, 1996
Installation at The Cleveland Museum of Art, August 25 - October 27, 1996
'Urban Evidence: Contemporary Artists Reveal Cleveland', a thematic group exhibition exploring some of the differing trajectories of the identity of the city of Cleveland during its bicentennial year. Seventeen artists from the U.S., Japan, and Russia were commissioned to create new work. A catalogue with essays by Eleanor Heartney and Gary Sangster was published.
aluminum, bronze, canvas, audio (live broadcast of WABQ-1540 AM, The Gospel Giant of Cleveland through multiple hidden speakers in the aluminum tubing)

“...the church door, as Durandus points out is symbolic of Him who said: I am the Door. It opens the way to eternal life...”
Anne O’Hare McCormick

The title of my installation is a reversal of the second chapter heading of Anne O’Hare McCormick’s book 'St. Agnes’ Church, an Interpretation' which is 'From Tower to Door' and from which the above quotation is taken.

As an Irishman who moved from Dublin to the Cleveland area in 1983, Cleveland initially seemed to have much in common with the Irish city of Belfast. Looking very much like a war zone, urban decay had run rampant and few people walked the streets. I remember Euclid as the first street I drove along. Once outside of the downtown business district, vacant lots and cheap, newer structures lacking distinction punctuated the mostly unkempt but interesting older buildings. Potholes were everywhere.

One edifice I saw that day has stayed with me. As I drove east, I came upon an unexpected sight at the south-west corner of East 81st Street. Standing forlorn on a deserted lot was a somewhat Italianate campanile that rose at least 150 feet into the air. Clearly it had been built to dominate its surroundings and like towers throughout history, to declare a position of power. The bell tower’s Romanesque style made it emphatically Catholic. Presumably in earlier days,a church had occupied the adjacent space but had at some point been demolished. Now the tower and empty lot alluded to the decline in authority of the church and an absent community that no longer cared.

Revisiting the tower recently for the first time in years, the lot is still vacant save for the addition of a slim metal radio tower equal in height to its stone companion. The radio station, WABQ-1540 AM, The Gospel Giant of Cleveland, broadcasts from the site and uses what was the old rectory, a nearby building, as offices. The change in use is intriguing and encourages some speculative thoughts. It got me thinking again about Jonathan Crary’s wonderfully prescient 1984 essay on broadcasting, Eclipse of the Spectacle, probably because of his references to Nikolas Tesla’s Wardenclyffe Tower of 1901-03.1

Research2 shows that a building, St. Agnes’ Church, was first erected and dedicated nearby on July 24, 1893 and enlarged in 1894. Work began on a new permanent structure at East 81st Street in 1914 which was completed and dedicated on June 18, 1916. “St. Agnes’ was one of 30 Catholic parishes formed between 1892 and 1908, during which time there was a big increase in the Catholic population of Cleveland. It was the first Catholic church to invade the east end of Euclid Avenue, then a choice residential district composed of the descendants of the early settlers of the Western Reserve. Following World War 1, eastward migration became a stampede and the east end became more densely populated and more commercial”.

The church was built in a French Romanesque style with a Byzantine influence and had a detached tower of the sort associated with Northern Italy. John C. Comes, an ecclesiastical specialist, was the architect. “The founder and pastor, the Rev. Gilbert P. Jennings demanded a building “...to set a modern standard for parish churches, adapted to fill its place in the changing life of an industrial city...”

In 1950, St. Agnes’ peaked as a parish of over 1000 families. By the 1970’s, with the exodus to the suburbs, fewer than 10 people attended Sunday mass.” St Agnes’ was one of three Cleveland churches demolished in late 1975. The bell tower was saved through public donations.

Before demolition, the Catholic Diocese of Cleveland held a liquidation sale of art, artifacts and furnishings. Among the buyers was Paul Minillo, owner of a local restaurant of the same name. It is still open for business. He purchased several windows, two bronze doors for $800, a confessional for $350 and four rows of pews for $300. Mr. Minillo converted the pews into seats for his cocktail lounge and talked about turning the confessional into a telephone booth.3 “Charged with attempting to escape from the problems of Cleveland’s east side and not showing proper respect for the past, an aide to Bishop Hickey responded that the church “...is not in the business of restoration of old buildings but exists to deal with the needs of people...”4 ”

1 Jonathan Crary, Eclipse of the Spectacle in Art After Modernism: Rethinking Representation, ed. Brian Wallis, Godine, 1984, pp 282-310“...No piece of sculpture better embodied the synchronous, history-rending aspirations of modernism than this tower. It could well be posed alongside Tatlin’s Monument to the Third International and Brancusi’s Endless Column to represent the three variants of modernist absolutism: corporate, historicist,and aestheticist...Although Tesla’s vision was to prove the most durable of these three, its full realization was postponed for over eight decades...”

2 The library at the Western Reserve Historical Society and the Fine Art Department at the Cleveland Public Library were particularly helpful. The primary sources used were:

Notes from the files of the Catholic Universe Bulletin

Notes from an uncredited, undated County of Cuyahoga file on St. Agnes’, W.R.H.S.

The Sandborn Perris Map Co.insurance maps of Cleveland (1894; 1917) at C.P.L. All quotations are from the County of Cuyahoga file unless otherwise credited.

4 From Cleveland Plain Dealer, October 20, 1975. The confessional did not become a telephone booth but was installed as a decorative element in the restaurant. 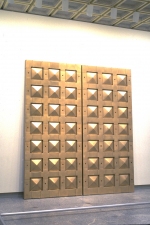 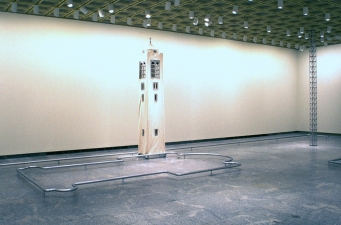 Reduced scale replicas of both the church and radio towers of WABQ-1540 AM at East 81st Street and Euclid Avenue. 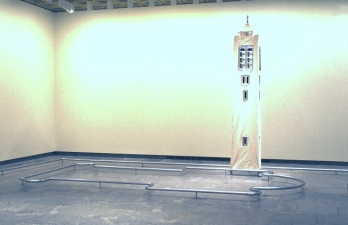 Outline in aluminum tubing of the demolished St. Agnes' Church, with the boundary edges of the site also demarcated. Multiple miniature speakers, inserted into the church outline, broadcast WABQ-1540 AM during the museum's opening hours. 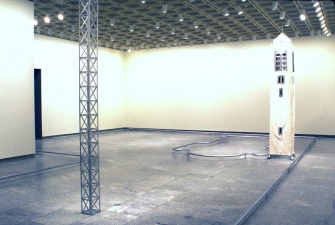